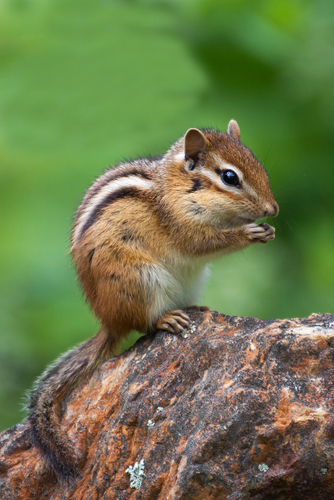 My cat, Pele, just brought me a chipmunk. I wasn’t too worried because I have learned they play dead and if I immediately scoop them up with a hand towel I can get them back outside before they become feisty.

So, as she walked into the house I ran for the towel. She dropped the chipmunk. I scooped it up. It was warm. Good, I thought, still alive.

I took it outside to my garden and placed it in the grass. I tried to pull the towel out from under it, but couldn’t because its paws were snagged in the fabric so I just left the towel under it. As I did so it looked at me and blinked. You are safe little chipmunk, I thought. Run away, I will keep her distracted. Then I sat down behind my patio furniture, with all the ants, and distracted my cat.

I waited five minutes and then looked at the chipmunk. It was still there. I walked over to it. It was dead. It’s eyes were half closed. I gently removed the towel. I began to cry. I gave it a blessing. And then I stood there crying. Pele looked at me like she had done something wrong. She looked sad. She had been so proud and now she looked sad, so I said to her, “Thank you so much, Honey, for providing for us. If we had been starving you would have fed us. You are such a good hunter.”  And I turned and walked inside so she couldn’t see me continue to cry.

I felt better as I thought this and I bent over to pull my laundry out of the washing machine. I stood up with my laundry in my hands. If I believe what I claim to believe, the chipmunk was sent to teach me about transience, to teach me that death does not have to be sad, it is simply transition back into non-physical. And his body is left behind as a gift to the magpies and to the earth.

I just walked back outside. And he is gone. He’s gone! He was still alive. Man, they really play dead, I thought to myself.  And then, it’s nice to have all these Buddhist beliefs and they soothe when needed, but let’s be honest here…it is so much nicer to have things you love stick around and not-die.